MOKULITO
Mokulito is lithography on wood instead of stone - it was discovered by Prof Seishi Ozaku in Japan over 30 years ago.It combines both lithographic and woodcut marks and doesnt need any strong acids or solvents unlike traditional lithography. There are lots of good u tube videos on line about the process including several by the  polish artist Ewa Budka from East London Printmakers who has been researching the process for several years.
My colleague Nina has been experimenting with the process a bit too and has achieved some interesting resukts so I thought it was time I had a go too.
So using a piece of plywood I:
1. Sanded the plywood down
2. Nina had found lithographic ink and crayon worked better than watery tusche -The plywood was drawn on and I also gouged into it to create white marks
3. The drawing was left to dry and rest for a few hours and then chalked and gummed and left
overnight
4. The gum was then washed off with water and the wood kept damp using damping cloths
5.. A  really runny ink (50% litho ink :50% plate oil) was rolled onto the damp plate very quickly.
(a foam disposable decorating roller was used rather than a traditional glazed roller)
6.. The plate was dried and then a thin piece of slightly dampened Japanese  /Hahnemuhle paper was placed over the plate and then the whole lot run through the etching press.
8. In total about 6-8 proofs (of variable quality !) were produced before the plate became too messy / unusable.

I liked the way the wooden grain was picked up and the marks that the lithographic ink produced and it was a much quicker, freer, experimental/ (but also inconsistent !) process compared to traditional stone lithography and best still - no graining! However I think I prefer the detail and more reliable marks achievable with stone (although maybe I just need more practice?) 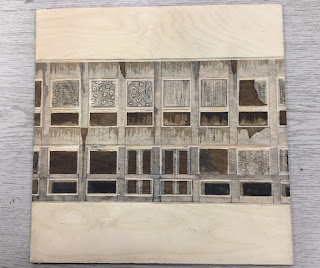 And the subsequent print: 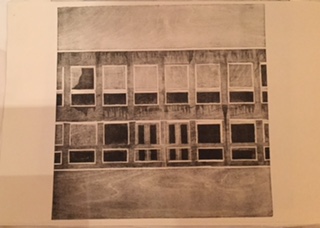 mandyp24
I am an artist based in Sheffield. In April 2015 along with Icelandic artist Nina Oskarsdottir I started a 2 year Fellowship at Leicester Print Workshop to learn the art of stone lithography under the tutelage of expert lithographer Serena Smith. This blog is to serve as a diary of what we get up to! My apologies if it's sometimes a little bit technical / boring and/or confusing - but part of its function is also to act as an aide memoir for all the different things we've learnt and to be able to look back to see how different effects were previously achieved. Further examples of our work can be seen on http://www.serenasmith.org/, http://www.axisweb.org/p/mandypayne/ and http://www.mandypayneart.co.uk and https://ninaoskarsdottir.wordpress.com